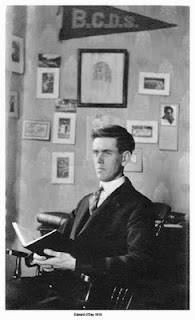 Edward J. "Doc" O'Day, was born in West Brookfield on July 11, to Edmund J. and Theresa (Lynch), O'Day according to town records.  Census records show that he lived on Ware Street in West Brookfield with his parents and three sisters.

Edward's World War I Draft Registration Card dated June 5, 1917 indicates that he was a Dental Student at that time, in Baltimore, MD.  The 1920 United States Census occupation entry for him is, "Dentist, just graduated." Dentistry, however, may never have been his occupation, as he went to work for the Boston & Albany railroad in the maintenance department by 1930, and was still working for the railroad at the time of his marriage to Grace Mary Dillon.

An account of the wedding of Grace Dillon, daughter of Mr. and Mrs. Henry Dillon of Ware, and Edward J. O'Day, son of Mrs. Theresa O'Day, appeared in the Springfield Daily Republican, March 29, 1932, page 17.   "Grace Dillon Marries West Brookfield Man"  The marriage took place on March 28 at All Saints church in Ware.  Other articles on the page tell of a strong Northeaster that day with heavy snow and blizzard-like conditions.  The couple had planned a honeymoon trip to Canada which I understand they never took.

Doc was appointed Postmaster in West Brookfield, by President Franklin D. Roosevelt in April 1936 after four years of unemployment except on the town roads.  (He had lost his job with the railroad shortly after his marriage in 1932.) He was Postmaster for twenty-nine years until his retirement in July of 1965.  His wife, and sometimes his son,  also worked in the Post Office.

Obituaries of West Brookfield residents often mentioned Edward  O'Day as a pall bearer.  Tall and distinguished in appearance, he also always owned a nice automobile in which the bereaved family members might ride.  I imagine many families called upon his generosity in their time of need.

Doc died in Mary Lane Hospital on January 7, 1971.  His obituary appeared the next day in the Springfield Union.  Grace continued to live in the home they had shared on Main St. until 2001.
Posted by L Smith at 11:38 AM No comments: