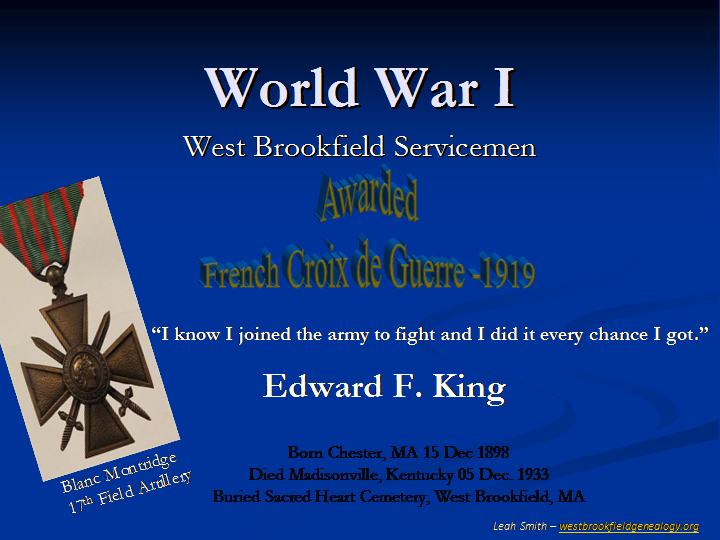 Edward F. King was born in Chester, Hampden, Massachusetts, on 15 December 1898.  He was  the third of four children of Edward W. King, born in Washington, D.C., a railroad section master, and his wife Mary Power who had come from Ireland as a young girl.  The King family moved to West Brookfield, MA, sometime between 1910 and 1920 and Edward is said to have attended school there.  He received his secondary education at Warren High School before moving to Hartford, Connecticut where he was employed by the Chase Metal Co.
Edward enlisted in the Army in Hartford, Connecticut on June 30, 1917, and received training in Sparta, Wisconsin.  He served in Headquarters Division, Battery C. of the 17th Field Artillery, of the 2nd Division, A.E.F. and saw action in France during World War I.  He was also a part of the Army of the Occupation of Germany.
The French Croix de Guerre with star was awarded to Edward for bravery in action in the Champagne battle during the attack on the famous Blanc Montridge.  He wrote a letter to his parents, dated March 20, [probably 1919], from Coblenz, Germany, relating his thoughts on his service, and an account of a review of the troops by General Pershing.   The letter was published in a local newspaper (probably the Spencer Leader) as was common during that era.
One quote from this letter reads, "The 2nd Division won its glory by releasing the doomed city of Rheims.  We lost men so rapidly that it was literally a slaughter.  All one had to do was just close one's eyes and fight like hell, and trust in the Lord.  We lost more men than any other division over here.  Some of the men are buried in the poppy fields of Flanders and in the fields of Picardy."
Another quote says, "I know I joined the army to fight and I did it every chance I got.  I know one thing, the old 2nd division never retreated, they always lead the attack."
Edward returned to the United States after the war, and sadly became ill with Tuberculosis.  He died December 5, 1933 in Madisonville, Kentucky after nine years of illness.  He was buried with full military honors on Dec. 9, 1933 in Sacred Heart Cemetery, in West Brookfield, Massachusetts.

Sources available upon request.
Posted by L Smith at 10:06 AM No comments:

Email ThisBlogThis!Share to TwitterShare to FacebookShare to Pinterest
Labels: King, World War I Recently I received some war time scrapbooks full of newspaper clippings.  Included are articles about local servicemen (some with photos), and also activities of local organizations in support of the troops, and the war effort.  There a some articles about war time rationing, and some recipes, as well.  There are handwritten dates on some of the articles, but the newspaper they came from was not identified (probably Spencer Leader and/or the Worcester Telegram.)
I hope to share the information contained in these scrapbooks in future blog posts; but in the meantime, I will be happy to answer requests for lookups.  Please leave a comment requesting information about a particular soldier of interest, or fill out the Information Request Form available by clicking on the tab above.