Clifford John Huyck was born Dec. 25, 1873 in Exeter, New York to Robert L. and Margaret (Warner) Huyck.  He studied medicine at New York Homeopathic College and Flower Hospital,  New York City, and was an 1896 graduate of Cleveland University of Medicine and Surgery.   A handwritten letter found in  (Town Records of Hancock, New Hampshire),  shows that on July 3, 1897, Dr. Huyck was appointed a health officer for the town of Hancock, and took the oath of the office that day.  It was a three year appointment.  That same year, on November 10th, Clifford married Elnora Parintha Pangburn, in Palermo, New York.  The young couple lived in Acworth, Sullivan, New Hampshire in June of 1900, where, in August of that year, a daughter, Freeda Elnora, was born.

The family left New Hampshire the following year, and Clifford went to work in Massachusetts, in the Westborough Insane Hospital, as an Assistant Physician. He made a five year study of Neuropsychiatry while there.  From Westborough he moved to Gilbertville, (a village in the town of Hardwick, MA), and then to West Brookfield in 1907.  Clifford and Elnora, welcomed a second daughter, Margaret Lovina into the family in 1912. 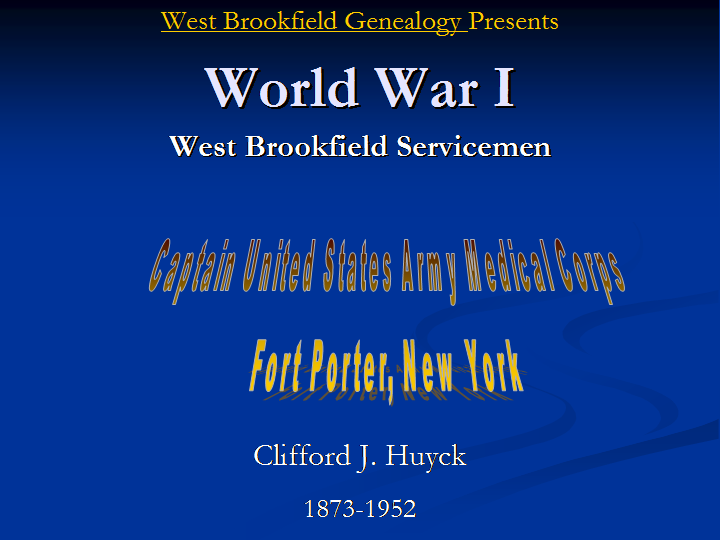 On October 25, 1918, during World War I, Dr. Huyck accepted a commission as a Captain in the United States Army Medical Corp, and served at Fort Porter in Buffalo, New York.  He was honorably discharged on Feb. 28, 1919, and returned to West Brookfield to resume his practice, and once again participate in the affairs of local organizations.  He was a Mason, chairman of the town's Board of Health, and was instrumental in gaining the charter for the local American Legion Post, chartered August 1, 1920.  Dr. Huyck was also active in Civil Defense matters.
Clifford Huyck died in Cushing VA Hospital in Framingham, MA on August 31, 1952, and was buried in Pine Grove Cemetery in West Brookfield.  He was remembered in a tribute in the Springfield Sunday Republican, published Sept. 7, 1952, as a "beloved country doctor.... a highly important factor in the community.....friend, counselor, and benefactor, as well as doctor."