﻿This week I received a  document from the Massachusetts Supreme Judicial Archives﻿.  I was surprised to know that the document was still available, because I had found the Naturalization Index Card on Ancestry.com which said, "Missing Record."  The online index card did note the court and its location; as well as, a volume and page number.  I also had a copy of two pages of a document with names, volume numbers, years, and page numbers of Missing Naturalization Records from Worcester County, MA, Court of Common Pleas.  One of the names listed was John Ducy from Vol. 2 under the year 1852, page 202. I contacted the Judicial Archives by email and gave the archivist the information I had.  I asked if the fact that the card from the index said , "Missing Record", meant that there were no naturalization or citizenship documents available.  I received a reply in a matter of a few days.  It simply asked that I send a SASE to the archivist for a copy.  I had no idea what I would receive for the price of two envelopes,and two stamps.


I was very pleasantly surprised when less than a week later I received a naturalization document with information I had been hoping to find for many years. 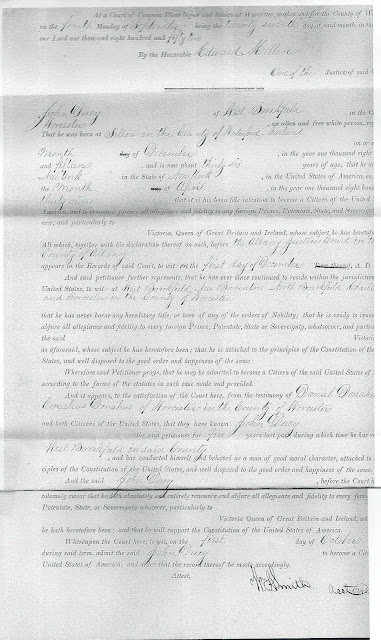 I realize that this image is somewhat difficult to read.  It is also missing a small part of the right side possibly due to a filming or copying error.

Below is some of what the document says.

John Ducy of West Brookfield, in the
C[ounty] of Worcester, an alien and a free white person, rep[resents] that he was born at Sillow in County of Waterford, Ireland, on or a[bout] Month of December, in the year one thousand eight [hundred] and fifteen, and is now about thirty-six years of age: that he ar[rived ?] New York in the State of New York on the Month of April, in the year one thousand eight hundred thirty nine; that it is his bona fide intention to become a Citizen of the United [States of ] America, and to renounce forever all allegiance and fidelity to any foreign Prince, Potentate, State, and Sovereignt[y ?] ever and particularly to Victoria Queen of Great Britain and Ireland, whose subject he has heretofor[e?] All which together with his declaration thereof on oath, before the Albany Justice Court in t[he] County of Albany appears in the records of said court, to wit: on the first day of December Term thereof,  A. D. [ ]

And said petitioner further represents, that he has ever since continued to reside within the jurisdiction [ ] United States, to wit: West Brookfield, New Braintree, North Brookfield, Charl[ton] and Worcester in the County of Worcester.

The document goes on to name witnesses Donald Donah[ue] and Cornelius Donahue of Worcester, in the County of Worcester who say that they have known the petitioner for five years during which time he has been a resident of West Brookfield in the said county.

Whereupon the Court here, to wit: on the first day of October [1852] during said term, admit the said John Ducy to become a Citi[zen of the] United States of America; and order that the record thereof be made accordingly.

This was a great find!  I now have more specific date and place of birth, and a year of immigration.  I know that John Ducy immigrated earlier than the famine immigrants, and after consulting an expert, I know that he possibly worked on the railroad which ran between Worcester, MA and Albany, New York.

I have not yet found Sillow in County Waterford, and do not know if Sillow is a religious or civil name, or even if it is spelled correctly.  I am hoping to spend more time looking into the information in the document.
Posted by L Smith at 4:12 PM No comments:

A young woman from California, with help from a few others, now has a very large family tree, which includes James and Ellen (Connor) Moran, their children, including Patrick, the main subject of the project, and his known siblings, and all of their descendants.  The research now dates back to the early nineteenth century in Ireland.  The information seems to fit together nicely, but proof is lacking in a number of areas and there are some conflicts to resolve.

When was Patrick born?

A U. S. Naturalization Index Card found on Ancestry.com, shows in Vol. 7 - 614, a Patrick Moran, of Spencer, MA, born Ireland, 15 Nov. 1943, was Naturalized Oct. 26, 1870 in Worcester Superior Court, Worcester, MA.  Our Patrick Moran married, Catherine Waters in Spencer in 1869, and they were living in Spencer at the time of the 1870 census.  From the information on that index card, we should be able to order a copy of Patrick's Naturalization records from NARA https://eservices.archives.gov/orderonline/start.swe?SWECmd=Start&SWEHo=eservices.archives.gov, or from the Massachusetts Archives http://www.sec.state.ma.us/arc/arccon.htm .   The Naturalization records, may or may not, have the townland where he was born.  Often, such records, will just say Ireland.  Sponsors should be noted, and it will be interesting to discover who Patrick's sponsors were.  My bet is that at least one of his brothers sponsored him.

The 1900 census entry says that he was born in Nov. 1847.  The 1865 Massachusetts census in Ware, has a Patrick Moran, soldier, age 22 [b. abt 1843] enumerated in household of James and Ellen Moran.  (We know that Patrick, was in military service until Nov. 1865, and that his parents were James and Ellen, and that he had sisters Mary, Eliza, and Johanna, and that the family had lived in Ware.)  The above Naturalization Index card indicates a birth date of Nov. 1843,  and we also have a transcribed church record for a birth or baptismal of a Patrick Moran, of Kilcooly, son of James and Ellen Connor, with March 1843 as the date.

Do all of these records pertain to the same Patrick Moran?
Posted by L Smith at 9:54 AM No comments: