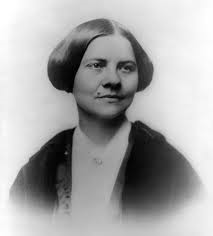 Lucy Stone, daughter of Francis and Hannah (Mathews) Stone was born Aug. 13, 1818 on Coy Hill, in what is now West Brookfield, MA.  Her parents were staunch Congregationalists who also shared abolitionist views.  Francis Stone also believed in advanced education for his sons, but did not support higher education for Lucy.

Lucy, after graduating from local schools, earned money teaching school, and doing housework in order to further her own education.  She eventually graduated from Oberlin Collegiate Institute in Ohio, and at the age of thirty, was the first woman from Massachusetts to earn a bachelor's degree.  Dedicated to the causes of anti-slavery and the advancement of women's rights, Lucy began speaking out publicly.  Women in those times, were discouraged and sometimes prevented from speaking in public, but Lucy found work speaking for the American Anti-Slavery Society and made many important speeches throughout the United States.

In 1855 Lucy married Henry Brown Blackwell after a two year courtship.  A statement was read at their marriage ceremony announcing that Lucy would keep her maiden name.  This was unheard of at the time, and later, women who retained their maiden names were referred to as "Lucy Stoners."

Lucy died in Boston, Oct. 18, 1893 and was the first person to be cremated in Massachusetts.

[This post really does not due justice to Lucy's many accomplisments.  I hope to have time to write a more thoughtful and thorough post in the future.]
A daguerotype image of Lucy is held by theNational Portrait Gallery
Posted by L Smith at 11:39 AM No comments: