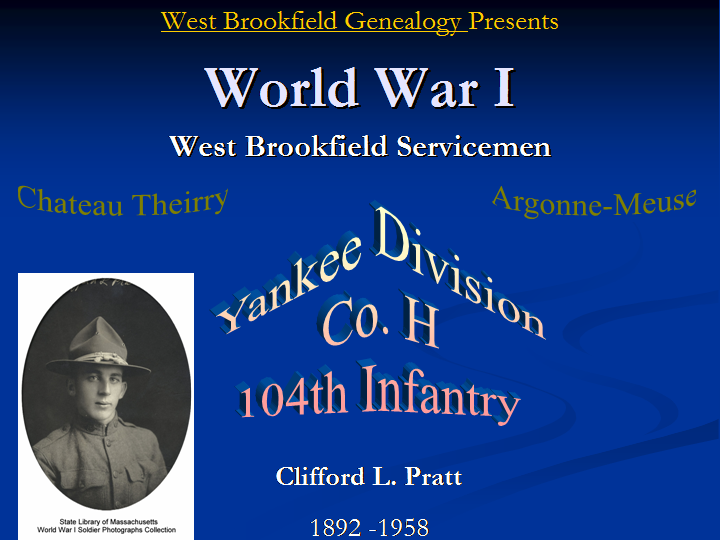 Clifford L. Pratt was born 20 April 1892 in West Brookfield, Massachusetts.  He was the fourth child born to James H. Pratt and his wife Martha "Mattie" Emma Potter.
Clifford served in Yankee Div., Co. H. 104th Infantry during World War I,  and was cited for his bravery at Chateau Thierry in France.  He was gassed at Argonne-Meuse receiving burns on his legs.
Mary Cora Boutin became his wife at St. John's Church in East Brookfield, MA on 19 August in 1919.  A daughter Evelyn Doris was born in 1920, and a son Leon was born in 1924.
Clifford was a Charter Member of American Legion Post 244 in West Brookfield, and its first Associate Commander.  He was Post Commander in the 1930's.  (This American Legion became the Adams-Coney-Frew Post #244 after World War II.)
He died suddenly at the home of Douglas Lyman in West Brookfield on 2 January 1958.  Burial was in Sacred Heart Cemetery after a requiem mass at Sacred Heart Church on the fourth of January. 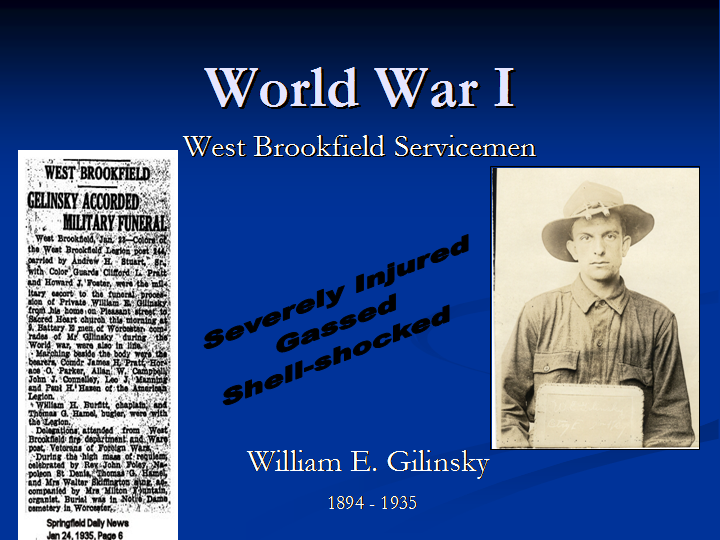 William E. Gilinsky was born 1894 in Worcester, Massachusetts to William E. Gilinsky, a Lithuanian immigrant, and his wife Josephine (Stone.) He enlisted in the Army from Worcester, on 26 May 1917, and served in Battery E. of the 102nd Field Artillery, during World War I.  He was honorably discharged on 17 January 1919.
William married Mary Emma Snyder in Worcester in 1923.  Two children soon followed, Mary Frances, in 1924, and a son who is still living.
On the night of 20 January 1935, while freeing sand from the back of a state highway department sanding machine,William was fatally injured when a car crashed into the rear of the sanding machine pinning him between the machine and the car. The accident occurred in Brookfield near Lone Oak Lodge. He was rushed to Mary Lane Hospital in Ware, where it was determined that both his legs were broken, and his lower body was crushed and mangled.  He died later that night.
A military funeral was held in Sacred Heart church in West Brookfield on January 23rd with members of the American Legion Post 244 serving as bearers and color guard. The procession included the American Legion Auxiliary, the Veterans of Foreign Wars of Ware, a delegate from the Battery E. 102nd Field Artillery Association of Worcester, and a representative from the local fire department.  The organ music for the mass was provided by Mrs. Milton Fountain, and soloists included Mrs. Walter Skiffington, Napoleon St. Denis, and Thomas Hamel. The funeral procession proceeded to Notre Dame Cemetery in Worcester for a committal ceremony following the mass.  Members of Worcester Post 5 fired a volley, and Thomas Hamel, bugler of Post 244, sounded taps