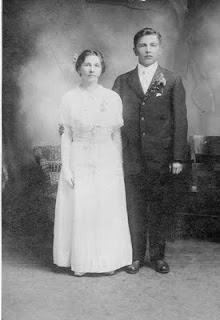 Walter Mazur, born July 1, 1884 in Slupiec, Galicia, Austria and Emelia Elizabeth Furgal, born 18 September 1888 in Lubacz, Austria were married in Warren, MA on August 3, 1909.  They raised four children in Warren and divorced sometime between 1920 and 1930.

Emelia married Edward Albert Buss in Gardner, MA on 1 July 1942.  She owned a home on Lake Wickaboag in West Brookfield where family gatherings were held.

Emelia died on 20 June 1961 in Norfolk, MA and was survived by her sons Lewis and Daniel, and daughter Wanda Laplante. She also left a brother Frank, and sister Stephania Motyka of Warren, and a brother John of Pittsfield.  She was predeceased by half-brother Anton Laska of Warren, sister Mary (Furgal) Smith of Newport, NH, and brother Michael Furgal of Monson, MA.

Walter died in Pittsfield, MA on 10 March 1947. He was survived by three of his four children. (A son, Roman, died in 1936 as the result of a work related accident.) He was also survived by his sister Mary (Mazur) Zion of Bridgewater, MA and was most likely survived by his father, Stanislaw Mazur,  of Slupiec, Poland. He may have also had surviving half-siblings in Poland.