Genealogybank, a paid newspaper website, has recently added 1930-1940 issues of the Worcester Evening Gazette to its "Newspaper Archives"  Collection. This is a welcome addition for those of us who research Worcester County families. I was able to find some obituaries for West Brookfield residents, that I was unable to find in the Springfield Newspapers already available at GenealogyBank, or in the Spencer Leader files on the Brookfield Resources site.

Email ThisBlogThis!Share to TwitterShare to FacebookShare to Pinterest
Labels: Newspapers

Will of Cornelius McKenney of West Brookfield, Massachusetts 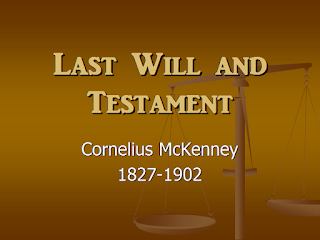 Cornelius McKenney﻿
Know all men by these presents, that I, Cornelius MacKenney of West Brookfield, in the County of Worcester and Commonwealth of Massachusetts being in good health and of sound and disposing mind and memory do make this my last will, hereby revoking all former wills by me at any time heretofore made.

1st. I hereby constitute and appoint my wife Catherine MacKenney to be sole executrix of this my last will hereby directing my said executrix to pay all of my just debts and funeral expenses out of my estate & then to receive the residue of my estate as hereinafter named.

I request that my said executrix be not required to furnish and surety upon such bond as the Probate Court my require when appointing her to said trust.

2d. After the payment of my said debts and funeral expenses I give and devise and bequeath unto my said wife the use and income of all the rest and residue of my estate to have and to hold the same for and during the remainder of her natural life.

3d. All of my estate may and shall be held in trust by my said wife, and in case the said use and income, shall in the judgment of said wife, be insufficient for her proper support, then and in such case, she may sell and convey have and use any part or portion of my estate both principal and income for her proper support all in manner and way she may or shall deem best.

And I desire and will that all such part of my estate as may or shall remain unexpended by my said wife for her proper support shall at her decease, be given to those who are then my next of kin in equal division.

4th. In making this will, I do not forget my two children, viz: my son James

and my daughter Catherine, but desire that my estate be disposed off per the parts of this my last will herein marked "2d" and "3d" and in no other way.

In witness of the above, I hereto set my hand this twenty first day of May in the year one thousand nine hundred and two.

Signed, published and declared by the above named Cornelius MacKenney as and for is last will in the presence of each of us who in his presence and at his request have subscribed these presents as witnesses hereto.

Email ThisBlogThis!Share to TwitterShare to FacebookShare to Pinterest
Labels: McKenney, Will

A Glimpse Into Merriam Family Bible 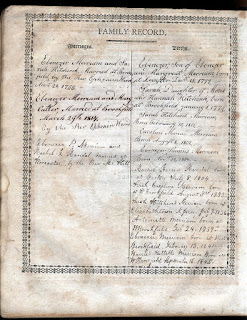 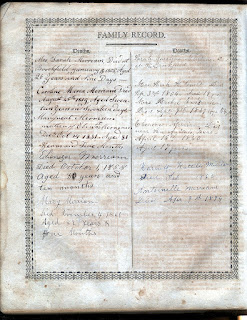 The Family Register entries appear to have been written by at least two different people, with the earliest birth date Dec. 15, 1777, and the latest death date April 9, 1894.

The loose items found in the Bible included:

The document contains the Irish county and parish of his birth; as well as the approximate time of his birth, and the time and place of his arrival in the United States.

Here I have transcribed the words in the document using italics where the information was handwritten on the printed form.  I have changed the formatting for readability and appearances sake.
COMMONWEALTH OF MASSACHUSETTS

To the Honorable Justices of the Court of Common Pleas begun and holden at Worcester, within and for the County of Worcester on the first Monday of December being the fourth day of said month, in the year of our Lord one thousand eight hundred and fifty four.
Cornelius McKinney of West Brookfield in the County of Worcester, an alien and free white person, represents, That he was born at in the Parish of Longfield in the County of Tyrone Ireland ion about the Month of January, in the year one thousand eight hundred and twenty seven, and is now about twenty eight years of age; that he arrived at Boston in the State of Massachusetts, in the United States of America, in or about the month day of October, in the year one thousand eight hundred and forty seven ; that it his bona fide intention to become a Citizen of the United States of
America, and to renounce forever all allegiance and fidelity to any foreign Prince, Potentate, State and Sovereignty, whatever, and particularly to Victoria, Queen of Great Britain and Ireland, whose subject he has heretofore been:
All which together with his declaration thereof on oath, before this court for this county appears in the Records of said Court, to wit: at the December Term thereof, A. D. 1852.
And said petitioner further represents, that he has ever since continued to reside within the jurisdiction of said United States, to wit: at West Brookfield aforesaid that he has never bourne any hereditary title, or been of any of the orders of Nobility; that he is ready to renounce and abjure all allegiance and fidelity to every foreign Prince, Potentate, State, or Sovereignty, whatsoever, and particularly to the said Victoria, Queen
as aforesaid, whose subject he has heretofore been; that he is attached to the principles of the Constitution of the United States, and well disposed to the good order and happiness of the same:
Wherefore said Petitioner prays, that he may be admitted to become a citizen of the United States of America, according to the forms of the statutes in such case made and provided.


__________________________________________________
I Cornelius McKinney do solemnly swear that I do absolutely and entirely renounce and abjure all allegiance and fidelity to every foreign Prince,
Potentate, State, or Sovereignty whatever, particularly to Victoria Queen of Great Britain and Ireland, whose subject I have heretofore been; and that I will support the Constitution of the United States of America. So help me God. 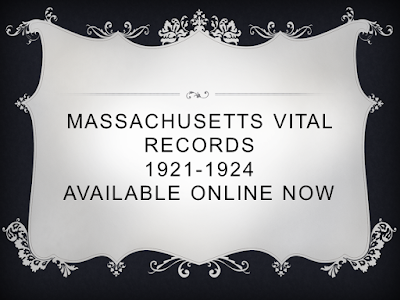 I recently became aware that the vital records from 1921 - 1924 are becoming available to browse at FamilySearch.org . The records cannot be downloaded, due to contractual obligations, but they are visible. Not all years for all towns are available, but progress has been made.

You must have a Family Search account to view the records.  The account is free of charge and it takes just a minute to set up.

The links below are to the West Brookfield Records


From the Spencer Leader published 27 July 1917 thru September 1917
Names of West Brookfield men of Division 2 with their red ink numbers.

Other men from West Brookfield who served:

Email ThisBlogThis!Share to TwitterShare to FacebookShare to Pinterest
Labels: Military, World War I The Congregational Library & Archives in Boston with assistance from the National Endowment for the Humanities has digitized old records from a number of towns and placed them online for free viewing. The West Brookfield records are in three volumes covering the periods from 1754 - 1826, 1756 -1818, and 1819-1867 and include information from church and town meetings, membership information, marriages, baptisms etc.

Here is where you can find these records.