Samuel Gardner Irish was born in Southbridge, MA on July 23, 1842 to Isaac C. and Lucy (Dodge) Irish.  He lived his boyhood years in Southbridge and moved to Brookfield in his late teens.  He worked in the shoe trade until mustering into Co. H of the 21st Massachusetts Infantry on Aug. 5, 1861.  Samuel was wounded in Newbern, North Carolina on March 15, 1862, and suffered a debilitating gun shot wound to the right shoulder at Petersburg, VA on July 30, 1864.  He was mustered out as a Sergeant on 30 Aug. 1864.  His service was credited to the town of Southbridge and his name appears on the monument there.

Samuel and Maria lived in North Brookfield where their daughter Mabel and son Chauncey Franklin were born.  They moved to Lake Street in West Brookfield sometime between 1880 and 1890, and in October of 1895 Maria died of Carcinoma of the Breast at age 51.

Samuel married Maria (Nichols) Morton in West  Brookfield on Nov. 25, 1896 and they continued to live in West Brookfield where Samuel was a Senior Vice Commander of G.A.R. Post 160.  Samuel's eyesight failed considerably and he suffered from heart trouble, fainting spells and dizziness; as well as headaches, during his final year of life.  He died on May 23, 1925 and was buried in Pine Grove Cemetery.

Samuel's son Chauncey "Frank" Irish married Jospehine Madden, daughter of John Madden and Johanna Daneher, and eventually relocated to Waterbury, Connecticut.  He shortened his last name to Iris and his descendants are known by that name.  Samuel's daughter Mabel married Henry Nelson Smith of North Brookfield, the son of Lemuel anad Cornelia (Nelson) Smith.  Henry was crushed to death by the electric train in Brookfield in 1908 and Mabel eventually moved to Springfield, MA.  Many of Mabel's descendants live in Worcester County today. 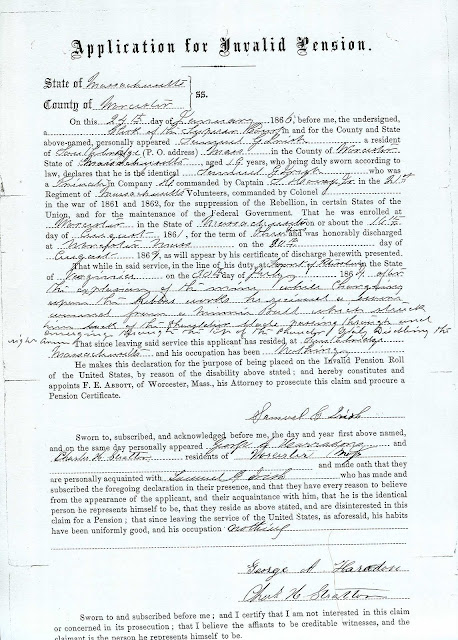